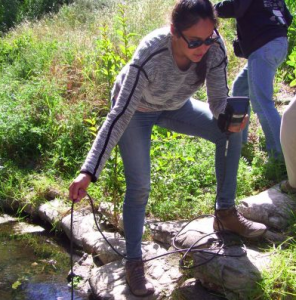 In collaboration with our fiscal sponsor The Watershed Project (TWP), SPAWNERS  has been monitoring water quality in San Pablo Creek and its tributaries since 2009. TWP staff and volunteers visit eleven sites along San Pablo Creek (including the SPAWNERS restoration sites at Wilkie Creek and the El Sobrante Library) once a month to record water temperature, dissolved oxygen content, nutrients, and more in order to better understand the current state of our watershed. TWP water quality monitoring data for the San Pablo Creek watershed is available here. If you are interested in engaging directly with the creek monitoring program, you can learn more here or by contacting Satoko Mills (TWP's Environmental Monitoring and Restoration Coordinator) at satoko@thewatershedproject.org. Continue reading to learn more about what we measure and why!

In San Pablo Creek, water temperature typically ranges between 10 to 20°C, but does not reach 25°C, which can be lethal to fish.

Aquatic organisms depend on oxygen for respiration. Oxygen is dissolved in water through aeration (e.g. by moving over rocks or waterfalls) and photosynthesis (as it is taken up by aquatic and riparian plant species). Cold water can hold more dissolved oxygen than warm water because the molecules in the water move slower and thereby retain more oxygen.

Conductivity measures the concentration of ions (charged particles) present in water. Conductivity is related to salinity, which measures dissolved salts. Freshwater animals prefer lower conductivity, preferably under 500 μmhos/cm, but in San Pablo Creek we typically record upwards of 1,000 μmhos/cm. Conductivity may be related to the underlying geology of the stream bed, or result from urban runoff containing nutrients like phosphates and nitrates, which are found in fertilizers.

What can you do? Avoid over-fertilizing plants, especially before it rains.

Turbidity measures how clear the water is, with low turbidity indicating clearer, healthier water. Sediment or dissolved solids in water can stick in the gills of fish, settle on top of spawning grounds, and even impair their ability to find food. Filter-feeding invertebrates such as clams and water fleas can become clogged with sediments, leading to starvation. It can even increase the temperature of the water, leading to lower oxygen levels.

Rainfall often increases turbidity in creeks, as stormwater runoff contributes to higher flows and can cause creek-bed erosion. Other sources of increased turbidity include algal blooms, waste discharge, and even animals or children playing in the water.

Fish prefer very clear water, with a turbidity of less than 10 FAU (Formazin Attenuation Units). We typically see this healthy range in San Pablo Creek, except for during and shortly after large storm events, when we have recorded upwards of 100 FAU.

Our pH measurements indicate how acidic or basic the water is in San Pablo creek . pH in streams can be affected by many factors, including urban runoff, mining activities, and even pine needles! Typically, organic matter and natural decomposition lower pH and urban runoff increases pH. A pH range of 6-9 is optimal for the health of freshwater fish and bottom-dwelling macroinvertebrates. The pH levels at all of our San Pablo Creek monitoring sites have generally been recorded in the 6-8 range, a good sign for our watershed.

Phosphates are an important nutrient for aquatic plants and algae, but too much can lead to unchecked growth and low oxygen conditions (similar to nitrates). Sources of phosphate include urban runoff such as fertilizer and detergents, as well as human and animal waste. In a healthy creek, levels shouldn’t surpass 0.5 mg/L. Although we do not currently test phosphate levels in San Pablo Creek, historic data indicates that phosphates are a major concern for our watershed, with past recordings frequently exceeding 2mg/L!

What can you do? Pick up after your pets, go to car washes that treat their soapy runoff, avoid using fertilizers with high phosphate contents, and never discharge water from your washing machine directly to the gutter.

Nitrates are an important nutrient for aquatic plants and algae, but (like phosphates) too much can lead to unchecked growth and eutrophication. It works like this: algae will grow and grow until the water is visibly green, preventing light from penetrating very far. The increased solids in the water increase the water's temperature. When the nitrates have been used up or when the sun goes down, the algae stop growing and become a major source of food for bacteria. Bacteria then grow at an exponential rate, eating algae and using up oxygen. This creates such a low-oxygen environment that many invertebrates and fish can’t survive. Bacterial metabolism also releases ions into the water that increase conductivity and reduce pH.

Sources of nitrates include fertilizer, animal waste, human waste (typically from leaking septic systems), and industrial pollution. Nitrate levels in San Pablo Creek tend to be below 1mg/L (considered healthy) except occasionally during and after storms, when we see peaks of up to 30mg/L.

What can you do? Pick up after your pets, avoid over-fertilizing plants (especially before a rain storm); and report leaking septic systems to EBMUD.

Benthic macroinvertebrates (BMIs) are bottom-dwelling bugs that are often found in riparian habitats. Tracking the presence and numbers of different BMIs can provide more long-term, generalized insight than water chemistry regarding the health of specific waterways. Each family of macroinvertebrates has a different pollution tolerance level, so their presence (or absence) can tell us a great deal about the health of a given creek over time. For example, mayflies have a very low tolerance for pollutants, so if the creek supports a thriving mayfly population, water quality must have been good for some time.